In the previous article, I have explained about using Comments in Java.

In this article, I am going to explain about Variables in Java.

Variable in Java is nothing but a name provided to a reserved memory location.

Let me explain with the below example.

There are two types of Variables 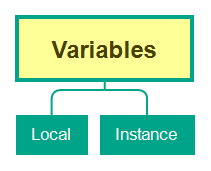 Before demonstrating Local Variable and Instance Variable, we have to first find out what is a local variable and what is an instance variable?

What is a Local Variable?

A variable which is declared inside the method is known as Local Variable.

What is an Instance Variable?

A variable which is declared inside the class but outside the method is known as Instance Variable.

Follow the below steps for implementing the local variable and instance variable in Java:

1) Let’s create a Java program and create a Demo class as shown below:

2) Inside the main() method, let’s create a variable and assign it with a value 2 as shown below: 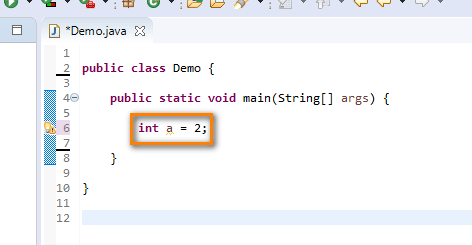 In the above program, the variable a is created inside the main() method, so we can call it as a local variable.

2 is the value stored in the variable a.

int is the data type of the variable, which will allow us to store integer values into the variable. Will explain more about these data types in the upcoming article.

3) Let’s print the value stored in the variable a using the print statement as shown below: 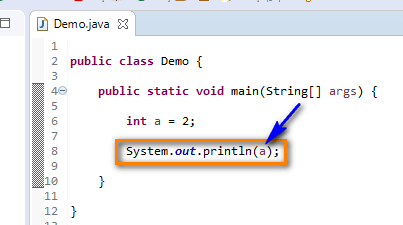 Save the Project and click on the ‘Run’ button.

Observe that the Program got executed and the value 2 stored in the variable a got printed as shown below:

Let’s move the above variable creation outside the method and inside the class as shown below: 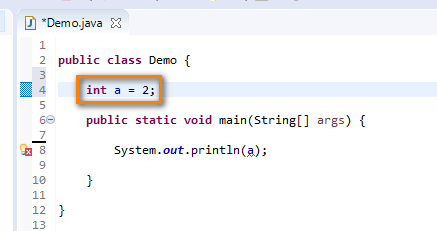 As we can see above that there is a compiler error in step 8.

Hover the mouse on the error and select ‘Change to static’ option as shown below: 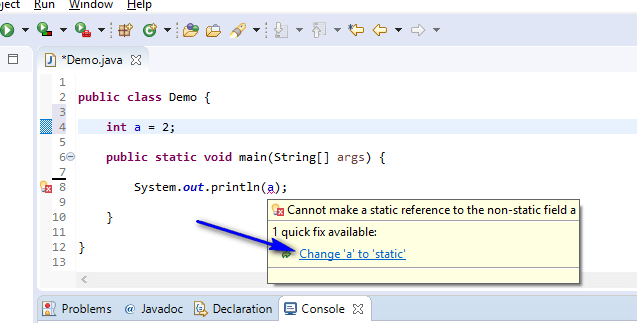 Observe that static keyword will be added before the instance variable and the compiler error will be resolved as shown below:

static keyword details will be explained in the upcoming article.

Save the Project and click on the ‘Run’ button.

Observe that the Program got executed and the value 2 stored in the instance variable a got printed as shown below: 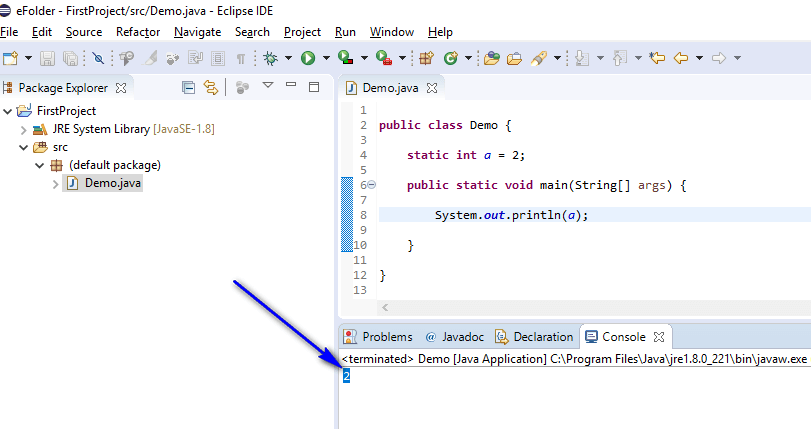 In the next article, I will explain about using Data Types in Java programs.

Please leave your questions/comments/feedback below:

On a mission to help the Testing Community in all possible ways.